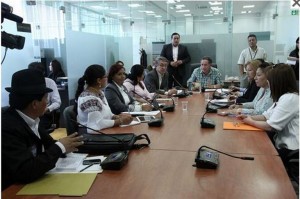 The analysis in the first debate of the Rural Lands and Ancestral Territories bill began this Thursday, January 22 amid protests of the Confederation of Indigenous Nationalities of Ecuador (CONAIE for its Spanish acronym), who demanded the ruling party´s proposal file.

Next week it will be decided whether the draft will go to pre-legislative consultation prior approval of the plenary of the National Assembly.

Carlos Loor (alternate of Marcela Aguinaga), who is a member of the National Peasant Coordinator, noted that the meaning of the original draft has changed, and said: “we want to make clear this disagreement, since I am from the Government, I amdissatisfied about things that are not being addressed responsibly and it´s not correct they play with a serious political project, that I consider serious.”

Loor insisted in taking to debate the Land bill submitted in 2012 by citizen initiative, with more than 40,000 signatures.

CONAIE was also in favor of this bill with the signatures of support, which stated that the “government decided to put it together with other four projects illegally.”