Lands Act, with no date for a vote 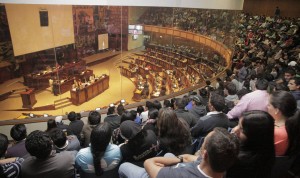 The draft Law of Rural Lands and Ancestral Territories does not have an approval date in the plenary yet; yesterday was the second day of the second debate and the session was suspended by the President of the Assembly, Gabriela Rivadeneira (AP), until a new date is set.

Representatives of the ruling party focused the debate on the participation of social organizations in the pre-legislative referendum and the project construction in general, they stressed the definitions of social and environmental function of the land and the fact that the bill helps to ensure the food security and sovereignty.

The second vice president of the Assembly, Marcela Aguinaga (AP), contended that the bill helps to combat the concentration of land, which began with the adoption of the Constitution in 2008.
Source: http://www.eluniverso.com/noticias/2015/12/23/nota/5312289/tierras-fecha-su-votacion