This Friday the National Mining Agency (ANM), reported that at least three people died after a landslide hit an illegal gold mine in the department of Cauca, West Colombia, while another 15 remain missing with little hope of being rescued in time.

“It is impossible they are still alive because the dirt and mud and stone were too much,” said Victor Claros, commander of the Fire Department of Cauca, on Caracol Radio. “I think we can assume that there are no people alive,” he added.

The rescue operation is being developed by a team of about one hundred individuals, including civilians and uniformed rescuers, besides heavy equipment operators, told Adriana Cuevas, assistant director of disaster management, of the state Risk Management Unit, to the AFP. According to her, the work, which also involved trained dogs, is moving slowly because of the instability in the field.

In the vein of gold where the disaster took place, six backhoes were operating while about 1,500 people were observing the work outside of a deep fifty feet land tunnel, according to AFP. 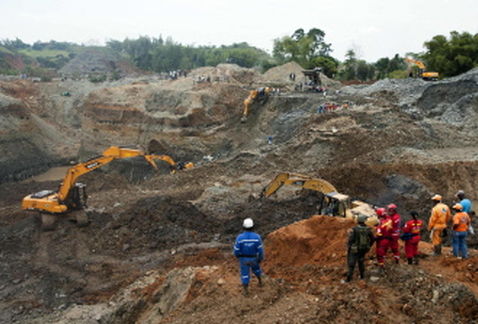 Rescue workers look for possible survivors of the accident in the illegal gold mine of Santander de Quilichao.

Rescue workers look for possible survivors of the accident in the illegal gold mine of Santander de Quilichao.