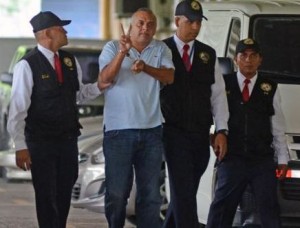 The defense of former Assemblyman Galo Lara asked yesterday at the final hearing to decide his extradition, the presence of the Panamanian former President Ricardo Martinelli and other members of his Administration, to explain the alleged payment of $ 6 million from Ecuador.

This was explained by the Panamanian lawyer and former Ambassador to the Organization of American States (OAS) Guillermo Cochez, part of Lara´s defense, who argued that the Supreme Court of Justice (CSJ) of Panama is acting “rapidly” in this case.

A spokesman from the maximum Panamanian court confirmed that today in the afternoon, the public hearing will be held and the rapidity is because it is being carried out under the regime of the adversarial criminal justice system.

Cochez said he wants the witnesses to explain why Ecuador “paid six million dollars” for the extradition of Lara, starting by Martinelli, who must be notified to attend.

The decision to set the hearing for today was taken yesterday after Lara’s lawyers were notified of the rejection of the resources to stop his extradition.