Lasso: “Correa, Nebot and Iza are the three interested in hitting democracy”

The triumvirate of conspiracy. This is how President Guillermo Lasso referred to three political actors who now claim to orchestrate a coup against the country’s democratic institutions. He mentioned it in an interview on TC Televisión with the journalist Carlos Vera from the Yellow room of the Carondelet Palace. 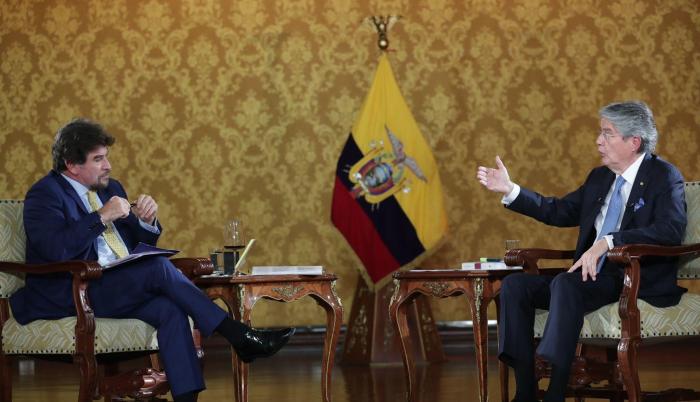 Carlos Vera and Guillermo Lasso, in an interview.

“I barely completed 100 days in which we achieved a successful vaccination plan, Mr. Correa did not wait to start the concerted attacks, first Mr. Correa, then the leader of the Christian Social Party, Jaime Nebot, then they activated the trolleys and Leonidas Iza follows him to warm up the streets. This trilogy coincides in a cause to hit democracy now appealing to the Constitution simply because they have a majority of votes. “

Regarding the crossed death, President Lasso insisted that it is a faculty that is in the Constitution and that any decision must be analyzed because an eventual dissolution of the Assembly can have a national and international impact on the role of his intention to attract investment. “I am not afraid of anything. I have not come to heat up a position and then have my portrait put up in this room. I have come to defend the interest of the people of those gangsters who disguise themselves as politicians. Correa, Nebot and Iza are the three of them interested in hitting democracy in Ecuador “.

Lasso insisted that the National Assembly, specifically the Council of Legislative Administration, violated the Constitution by not qualifying the draft Law Creating Opportunities. Although he acknowledged that there are errors in the text, such as those in article 70 of the package on labor reforms, which says that employees must compensate the employer in a certain case of the employment relationship. “I have said that every bill is perfectible, and that civil society has every right to point out errors and that the Assembly has the right to debate … We are going to see what will happen when I present three bills to them.”

Regarding the Pandora Papers, the president said he was willing to go to the Constitutional Guarantees Commission that analyzes the case and even to the plenary session of the National Assembly. He revealed that in several of the offshore companies that, according to the publication of the International Consortium of Investigative Journalists, were related to him, they had absolutely no links. He insisted that he has directly and indirectly paid $ 588 million in taxes between 2005 and 2020.

In terms of security, Lasso did not rule out starting a pacification process with the mafias under the mediation of the Catholic and Evangelical Church. Of course, he stressed, it cannot be ignored that during Rafael Correa’s government he was permissive with drug trafficking groups and that the Lenín Moreno administration failed to take measures to solve this problem.

12,135 vehicles were placed in September, the highest sale so far in the pandemic