The second meeting of the National Council of Work and Salaries (CNTS) is scheduled for today, to define the Unified Basic Salary (SBU) of 2022. Both employers and workers arrive at the appointment without a defined figure. However, the backdrop for this year’s debate will be the campaign promise of the President of the Republic, Guillermo Lasso, to increase the SBU from $ 400 to $ 500. 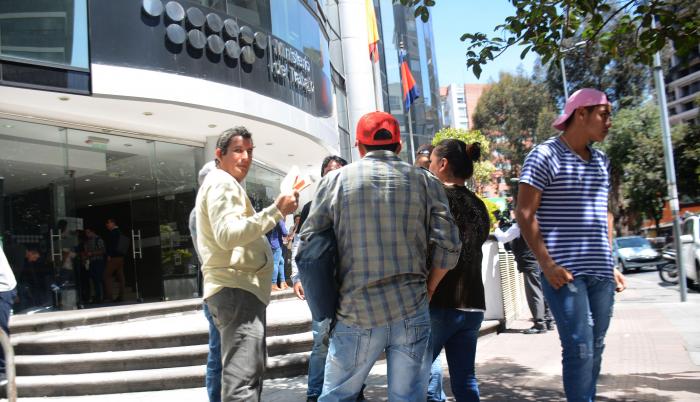 A group of workers waits on the outskirts of the Ministry of Labor, during an official meeting that sought to fix the salary increase, in 2019.

The Minister of Labor, Patricio Donoso, has clarified that the increase will be in four years and that it does not necessarily imply an increase of $ 25 each year until reaching the figure promised by the president.

“There is a firm proposal from the President of the Republic and on that basis, we are going to talk,” said Édgar Sarango, president of the Central de Trabajadores del Ecuador.

However, Sarango added that they do not have a concrete proposal on the SBU and that they are aware of the complicated economic situation in the country. “We must find a mechanism that allows us to reach $ 500 in four years,” said the workers’ representative.

In the first meeting of November 9, the macroeconomic projections that serve as a reference to set the SBU were presented: it is estimated that economic growth for 2022 will be 2.85%, while average inflation would reach 1.28% on next year.

On the business side there is no proposal either. Rodrigo Gómez de la Torre, representative of the employers, said that it should also be taken into account that in 2023 the Ecuadorian economy is projected to slow down its growth rate. In addition, he pointed out that the salary increase must be carried out with the creation of employment in mind. “This increase in that small percentage of the population that has a job is going to affect all the rest of the citizenry. The salary increases leads to inflationary processes,” argued Gómez de la Torre.

The employer representative indicated that if there is no agreement on the SBU between employees and entrepreneurs, the Government has to define a figure according to the projected inflation for next year: that is, an additional $ 5.12.

In 2020, the previous president of the Republic, Lenín Moreno, kept the SBU at $ 400, with the promise of giving compensation of $ 60 to 380,959 people who won the SBU in 2020. However, that offer was not fulfilled because resources were allocated for it.

According to the results of the Remuneration Survey for 2021, prepared by the consulting firm PwC in 2020, only 8% of the participating companies had planned to carry out salary increases. The increases were estimated to be 0.40%.

In its latest report, the multilateral body indicates that the definition of the minimum wage must be tied to the productivity of workers.

The Fund ensures that the Ecuadorian labor market is rigid and the high basic salary affects competitiveness and equity in the productive sectors, when compared to other neighboring nations.

Currently, the UBS of Ecuador is one of the highest in Latin America, only surpassed by countries such as Chile ($ 441) or Uruguay ($ 423).

In Guayaquil they will produce fly flour to make balanced