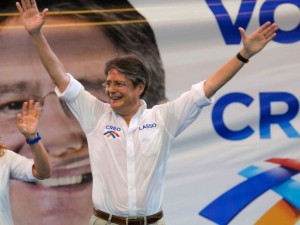 The former candidate Guillermo Lasso said he would quit its political aspirations, only if President Rafael Correa withdrew the draft constitutional amendment for indefinite reelection.

“To better explain what I mean, I will build a hypothetical scenario. If President Correa would say: if Lasso waives his political aspirations, I withdraw the proposed amendment and I will not alter rules of the game. I would agree and willing to retire from politics if the President is committed to respect the Constitution and no longer alter the rules on the way,” he said.
The announcement was made today because he believes that the package of 17 amendments proposed by the government to the Assembly is only the indefinite reelection. “We must not fall into the trap,” Lasso said maintaining that the intention of the regime is to make the country discuss issues are not the substantive.

The former banker also called the draft Monetary and Financial Code of a legal body “straw man of foreign investment to the country, especially in banking.”