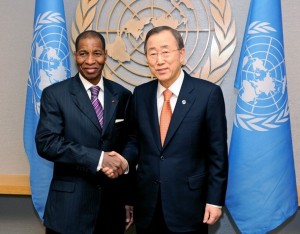 Ivorian Coast politician Laurent Gbagbo finally surrendered after a military assault on his residence in Abidjan. The former president is under the custody of the UN guard. The event occurred when the UN forces that supported the official president, Alassane Ouattara, along with French tanks assaulted Gbagbo residency. The accounts of how he finally surrendered are sketchy, and no official comments have been made.

Gbagbo is being accused by the UN peacekeepers, since the former president military forces are responsible for killing around 1,000 during the hostilities against the pro-Ouattara forces. Due to the violent confrontations 100,000 of civilians have abandoned the country. Meanwhile the Ivory Coast representative to the UN, Youssoufou Bamba informed that Gbagbo would stand trial.

After being captured, Gbagbo commented that he needed to speak to “President Alassane Ouattara” as soon as possible. Meanwhile several celebrations occurred after the arrest of the former president, however, several officials claim that the war is not over and peace will not come until all the militia has been apprehended.

Facebook Will Not Pay More Money to Winklevoss Twins