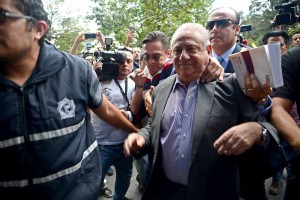 Lucia Vallecilla, defense attorney of Luis Chiriboga Acosta, suspended president of the Ecuadorian Football Federation (FEF for its Spanish acronym) and who is under house arrest, said that her defendant is innocent of the crime of money laundering and other offenses indicted by the US Attorney’s Office in the FIFAgate case.

This week Assemblyman Ramiro Aguilar published the report of the Financial Analysis Unit (UAF), which led to the indictment of the Prosecution against Chiriboga and other officials of Ecuafutbol.

Vallecilla explained that the UAF report is not complete. “It is not clarified what we have justified on the management of that money. The Assemblyman only made public the report of December 3 (2015), when he knows that this was only the beginning of the preliminary investigation.”

“The revenues of Chiriboga from 2010 to 2015 have been justified in his accounts. It is said that values do not match (due to the organization of artistic shows), but we demonstrated the legality of those funds,” she explains.

Vallecilla guarantees the transparency of the documentation submitted and hopes that there is total transparency in the process.