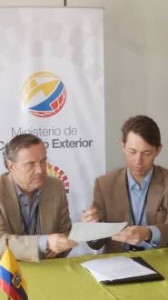 Roberto Betancourt, head of the national negotiating team for the trade agreement with the European Union, said that the legal review of the document text will last at least until November.

Francisco Rivadeneira, Minister of Foreign Trade, said yesterday that the publication of the draft document was done because there are great expectations of the population to know the contents.

“These are not final versions, they have to go through the legal scrutiny and the translation process, but we expect no substantial changes from a legal perspective,” said Rivadeneira.

Rivadeneira clarified that the official final text will be submitted to the National Assembly for its treatment.

Trade agreement with the EU is under legal review