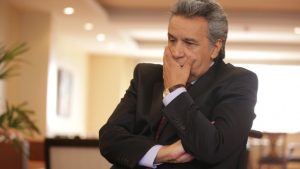 He has still not landed, but critics await him in the track. The expected return of former Vice President Lenin Moreno (PAIS) to Ecuador to take over the unannounced but predictable presidential nomination has brought an evident doubt: Could the special UN envoy for people with disabilities exercise his duties from the country?
Internationalists consulted by daily Expreso contend yes. And no one is able to explain why over a million and a half dollars, provided by the Ecuadorean government, went to Moreno’s office in Geneva, Switzerland. A budget that, in the words of President Rafael Correa himself, “costs us more or less the same an embassy costs.”

Former ambassadors and professors Carlos Estarellas and Abelardo Posso have agreed, in an interview with this media, that “Moreno did not have to leave the country” to exercise his duties. This is because a representative of this level “has no dependencies or office work; he is not a UN official, is only one person who represents an idea, in this case, the disabled,” says three-time Foreign Minister Jose Ayala Lasso. In fact, “most of these special envoys are artists, businessmen; relevant figures who do not receive money from the UN or their governments. At least, the cases I know,” says Ayala Lasso, who indeed has a depth knowledge of the UN he was ambassador of the country to the organization and president of the Security Council on two occasions (I).

IESS debt is unfettered according to Richard Espinosa

Referendum for the reelection of Correa will not be carried out