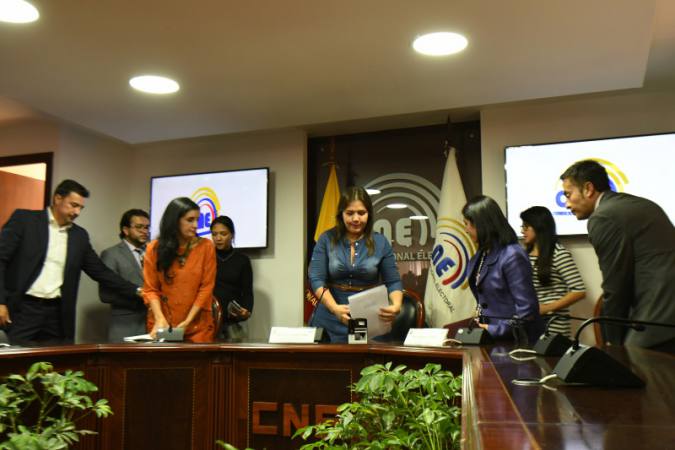 The National Electoral Council (CNE) has fourteen days to convene the popular consultation promoted by President Lenin Moreno, through executive decrees 229 and 230.

At noon yesterday, Moreno sent to Johanna Pesántez, his legal secretary of the Presidency, to the CNE, to deliver his decision to call a seven-question consultation (five of constitutional reform and two of consultation), once the Constitutional Court (CC) did not qualify its constitutionality.

The lawyer arrived with the Vice President, María Alejandra Vicuña; the secretary of Carondelet, Eduardo Mangas, and the ministers Rossana Alvarado, Lady Zúñiga, Tarcisio Granizo, Javier Córdoba, who manage the areas involved with the plebiscite.

They were not received by any of the five electoral counselors, but by the secretary of the Council, Fausto Holguín. From that moment the deadlines established in article 184 of the Code of Democracy began to run: 15 days to convene and 60 to make the elections.

Moreno justified that he is assisted by “the right of the people, and because I am protected by art. 105 of the Law of Jurisdictional Guarantees I have sent to the CNE the Executive Decrees 229 and 230 summoning the popular consultation. Let’s go for a resounding YES! “, He wrote on his Twitter account.

His decision would have materialized on Tuesday night, in dialogues between high officials of the Executive and the CNE, because they had known that a majority of judges of the Constitutional Court  would give a negative vote to the constitutionality -especially- of the reforms related to eliminate the indefinite re-election and restructuring the Council of Citizen Participation and Social Control.

But Pesántez assured that the Court has exhausted the 20 days it had to give its opinion, according to Article 105 of the Law of Jurisdictional Guarantees. The Government counts the deadlines since October 5, when the magistrates met in full the content of the proposal, sent on October 2. “The 20 days have gone by too much. The opinion is considered favorable. So what the Court does is no longer valid.”

Those who oppose this mechanism already announce actions. A Council of Citizen Participation and Social Control member Edwin Jarrin,  plans to present a claim of unconstitutionality to the decrees, and request precautionary measures so that the CNE does not process the request. Former President Rafael Correa announced that Alianza PAIS will appeal the call. “It’s a coup d’etat.”

He said that “nobody is doubting the president’s ability to call a consultation, I did it four times, but always ascribed to the government plan presented and ordered by the people at the polls …”. He added that although “the president has the power to send a decree for the CNE to convene the consultation directly without going through constitutional control,” his criticism was for the explanation that the deadlines have expired. “Deadlines expire next week.”

The Presidency of the Republic sent the draft amendments to the Court on October 2. He alleges that the 20 days of unanswered deadline have already passed and accepts Article 105 of the Law on Jurisdictional Guarantees and Constitutional Control that after that time it is understood that the opinion on the seven questions is favorable.

The Executive Decree indicates as one of the recitals that were already acted like this in 2011 when then-President Rafael Correa called for a consultation for La Concordia because the Court did not rule within 20 days. The request for this consultation was made on October 19, 2011 and the decree of convocation on November 28 of that year.

Lenin Moreno asks to notify the state Comptroller so that, if applicable, it will impose the administrative sanctions to which it may arise, identifying the corresponding responsibilities, as established in the last paragraph of Article 105 of that law that indicates that the omission of the Court will lead to sanctions. (I)