Flaming the flag of Ecuador and next to his ministerial cabinet, President Lenin Moreno reappeared yesterday on the balcony of the Carondelet Palace, surrounded by police, military and metal fences the last eleven days, because of the violent demonstrations that occurred in the surrounding streets to the Plaza Grande. 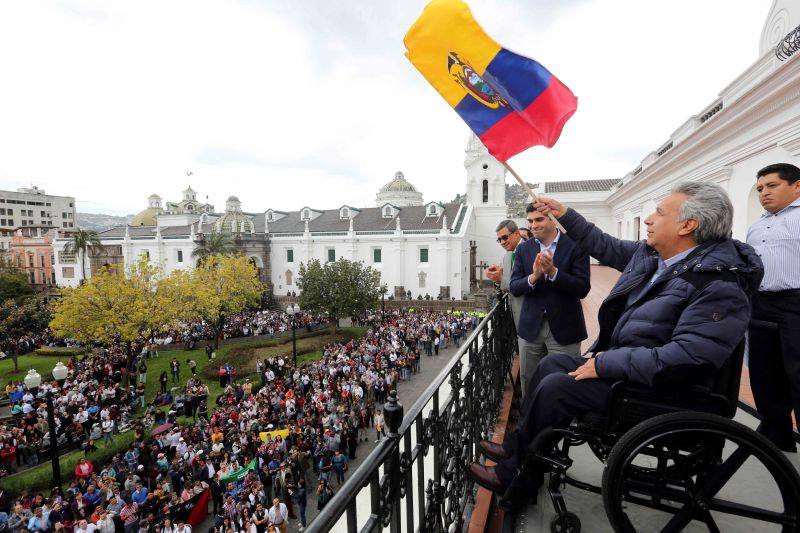 The General Secretariat of Communication confirmed at 4:30 pm yesterday that, by that time, there was still no new decree or decrees repealing the 884 and 888, although, this week, the hitherto head of the Joint Command of the Armed Forces, Roque Moreira, reported that the state of emergency ended.

While dozens of people stared at the balcony in the Plaza de la Independencia, Moreno raised with his hands those of his wife, Rocío González, and that of Minister Oswaldo Jarrín. Days before, the indigenous leadership conditioned the dialogue not only to the repeal of economic measures, but also to the departure of Jarrín and the Minister of Government, María Paula Romo, who was also present on the balcony.

“Now comes justice and strength, reconciliation with justice. Now comes the decision to improve the future … and to be able to live in peace. The people of Quito, of Ambato, of Riobamba, of Cuenca, of Latacunga, were cautious, but they know perfectly well that violence can return, ”said Moreno.

The dialogue between the Government and the workers to agree on labor reforms, scheduled for yesterday, was postponed, the United Nations reported.