On the corner of “6 de Diciembre y Tarqui”, a zone that was the epicenter of violence, the pungent smell of fires and the remnant of tear gas in the air still cause itchy nose and burning in the throat, four days after the disturbances. There, in the shadow of the burning building of the Comptroller General of the State and in front of the El Arbolito park, President Lenin Moreno yesterday fulfilled one of those symbolic acts that the power reserves to send the message that everything is under control: he toured the area, verified the damages in the commercial premises that were assaulted by the vandals, gave ears to their owners and gave them aid for up to 20 thousand dollars in Banecuador checks. Between one thing and the other, he slipped two or three political statements to take into account. 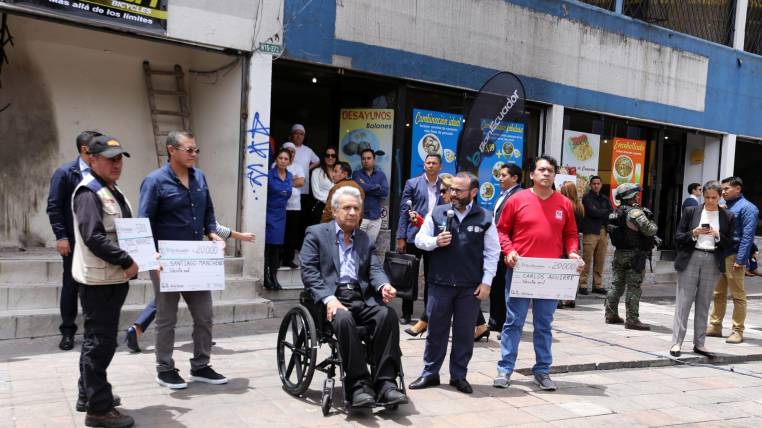 Half a hundred soldiers dressed in camouflage formed a wide seat belt that cut traffic on the two avenues. The event, which was attended by the presidential secretary Sebastián Roldán and the Minister of Government, María Paula Romo, took place on the sidewalk of cobblestones (broken, scorched) that the minga of Monday replaced halfway. Between two cevicherías and in front of the twisted irons of what was the door of the bicycle store that the crash groups ransacked over the weekend, Lenín Moreno announced the creation of a fund of 16 million for the granting of “easy credits” of between 10 and 20 thousand dollars to businesses affected by the demonstrations.

He had arrived on time and did not speak for more than five minutes. He blamed the acts of violence on “mobs of hired criminals” who infiltrated the indigenous mobilization, “vandals and Latin Kings to which Rafael Correa granted many privileges.” He acknowledged the failures of the intelligence services that did not foresee what was being prepared and dropped worrying news: “I have the dangerous alert,” he said, “that people from Quito and other cities in the Sierra are acquiring weapons.”

He dedicated a few but well-calibrated words to the ongoing negotiations to reformulate the repealed decree 883: “We are working not to favor the drug traffickers, the richest and the smugglers. We will correct that under a formula that does not affect the poorest. And if there is something to compensate, we will do it rationally. ” And in a more determined tone of voice: “We have a fair government, if that detracts from us, I’m worth a damn.” He closed with a note of suspense around a revelation that was saved for another time: “I have already learned,” he said, “how the diesel and gasoline chain works. Who benefits I will say it in due course. It will be known. ”

A neighbor came forward and asked for the word: “We urgently need a UPC,” he said in a plea. The president searched among his group of companions: “María Paula!” He called. “Construction will begin in the next few days,” the minister announced among the applause of the neighborhood, and took the opportunity to refresh some figures: 26 UPCs were burned during the riots and 104 vehicles and police motorcycles were destroyed.

The president did not want to go without going around the area. He spoke with the owner of a vehicle lubricator in front of the Comptroller’s Office, stopped to contemplate the ruins of the burning building and asked to enter the restaurant El Fogón Quiteño, where the violent entered the bag and respected nothing. But nothing: neither the kitchen, nor the pots, nor the dishes.

The site is a desolation. Lenin Moreno was moved by the story of Saskia Villalba, the owner, who summed up her condition in seven words: “I have been left empty-handed.” And then he left, in the presidential SUV. To say that after the visit the neighborhood returned to its routine would be little exact: there is still much to rebuild before normality returns.