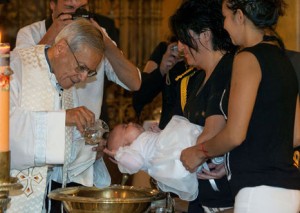 The Argentine Catholic Church baptized this Saturday to the daughter of a lesbian marriage coupled with President Cristina Kirchner as the godmother, first case in the country, in a gesture of opening of the institution that the Pope Franciscon leads.

Umma, conceived by fertilization assisted and born in last January, was anointed with the sacrament in the Cathedral of Córdoba (Center) by permission of the Archbishop Carlos Ñáñez and has as the godmother to the driving force behind the law that permitted Carina Villarroel (32 years) and Soledad Ortiz (28) become married in 2013. Kirchner was absent at the ceremony and instead sent a naval aide.

Although there is a history in other countries, including Spain, the fact is unprecedented for a marriage of lesbians in Argentina, homeland of the Francis Pope, who, as Archbishop of Buenos Aires, has opposed same-sex marriage, although he advocated granting the baptism of gays in a country with 75% of Catholics.

He argued, baptism is proof that for the Church “Umma is equal to all the children.” “That is the message, we are all equal, in the world we are all equals, heterosexual and gay, all have the same rights”.

Last year the Church already had granted baptism to the twins of the popular transsexual actress Florencia de la V and her husband, she being the first person who accepted the law of gender identity which was awarded documents as a woman.

The baptism of Umma was held in the beautiful Cathedral of Cordoba, 700 km northwest of Buenos Aires, under authorization of Monsignor Ñáñez, although another priest was who officiated mass.