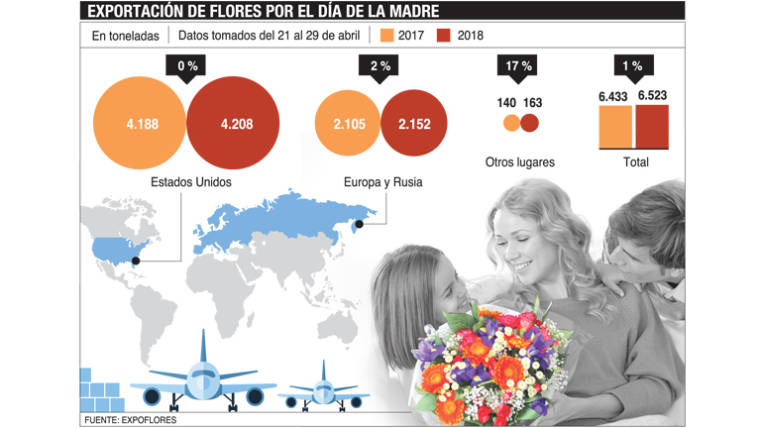 It has not been a good year for the floricultural sector. The problems of logistics, which at the beginning of the year affected the export of roses for Valentine’s Day, today again threaten the projections of shipments (about 11,573 tons) that the sector has planned for the next celebration of Mother’s Day. The shipments began on April 21, but the lack of flights is causing the cargo to be retained in airports.

Until April 29, the sector managed to ship 6,524 tons of the product, some 413 tons less than what had been projected up to that date. According to representatives of the National Association of Flower Producers and Exporters (Expoflores), the inconvenience of shipping is due to a low supply of charter flights by airlines that, for these days, have reported technical damage to their aircraft. A situation that both producers and exporters question, because they reject that in addition to being a repetitive problem “coincidentally” occurs in a time of high demand.

Among them is Bernardo Espinoza, manager of the company Pambaflor S.A., who remembers that the problems are not now. They started last October, he says, and have had a significant impact on important dates such as Thanksgiving, Christmas, Valentine’s Day and he fears it will be repeated now when Mother’s Day is near. For this last date he plans to ship 4,000,000 stems. “We have already managed to deliver 70% of our production at the airport. Of which has traveled 50%, but there is a 20% -25% that is still retained in the cold rooms of cargo. ”

Jorge Garcés, manager of Alianza Logística, one of the main cargo agencies serving more than 600 farms in the country, argues that airports are up to 48 hours late to receive the merchandise, this because, he explains, there is no recurring confirmation of flights. And clarify that this is not the only problem. This shortage has also caused service prices to rise. “The load per kilo went up from $ 1.20 to $ 1.80,” he says.

Espinoza is afraid of waiting. “Normally the flowers should stay maximum 24 hours at the airport, at present there are companies that have been delayed up to 5 days in being able to move.” Not taking it on time, he explains, means running the risk that the flowers will not arrive in optimal conditions, that customers will be lost and that it will affect the situation of a sector that last year generated $ 881 million of export revenue.

Through a statement, Expoflores informed the sector that it has held meetings with different airlines and cargo companies and that a solution to the problem is still awaited. Descalzi speaks of the need for the medium and long term, the State can provide incentives to airlines so that they begin to see Ecuador as an attractive market, especially in times of low demand in which profitability falls. The majority, he says, prefer to operate in other markets such as Peru, where the export of products, such as asparagus, usually generates higher profits. (I)