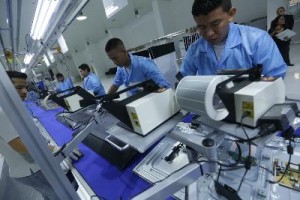 The LG Smart TVs are assembled in Ecuador under Korean supervision.

LG Smart TVs are assembled in Ecuador to thereby offset the fall in demand. Prices had to become cheaper or sales would continue to decline.

For this reason the Korean company decided to assemble locally. In words of the president of LG in Ecuador Sunghwan Ma: “Due to the economic situation we have to prepare to be more competitive, more suitable for the Ecuadorian consumer.”

The production line of LG in partnership with Innacensa, began assembling screens of the Korean brand with imported parts as the structure, small electronic components or the motherboard. Secondary mainboards, also imported, in short, will be ‘made in Ecuador.’

Another section of the plant, located in the Duran-Boliche way, is dedicated to manufacturing electronic cards. Thus, the percentage of electronic component will pass from 13% to over 20%.

With all the microelements and supervised by Korean engineers LG is now in its 15 day trial period the the manufacturing process of electronic cards. “I am grateful to the Ecuadorians because they are very traditional and quick in their work, this never fails,” said Ma, known in Ecuador as Hugo, to the means with a good command of Spanish. But that will be from December. So far, packing elements are being mainly incorporated.

Achieving a monthly production of 16,000 television sets of 32, 43 and 49 inches, and computer monitors of 19 inches is the result of this strategy, initiated two years ago.