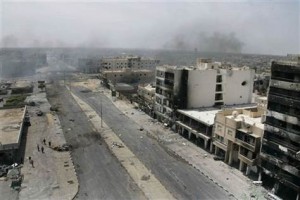 Libyan forces loyal to Gaddafi bombed the rebel city of Misrata. At least 30 people have perished and 60 more were injured in the attack. Ahmed al-Qadi , an engineer that works with a radio station in Misrata informed about the casualties.

Presumably the attack was made as a counter measure of the NATO attacks during the early hours, when several planes destroyed a building inside the complex of Muammar al Gaddafi, in Bab el Azizia, Tripoli. This was a direct attack against the life of the Libyan leader according to the press of the regime.

Last Saturday the Vice Minister of Exteriors, Kaled Kaim, assured the regime forces retreat. However, this was a lie since on that same day 28 people died. Sunday morning Kaim informed that the army was not leaving the city and it will only detain his military operations, but this was also a subterfuge. The bombings performed by the regime fell upon the downtown and center of the suburbs of the city.

The Libyan dictator cannot allow this city to fall since it is one of the largest; meanwhile bodies keep piling up in the morgues. Gaddafi has deployed of armored vehicles and Libyan soldiers to nearby locations, like Sirte, which are important bases for the Libyan dictator.