Liquidation Commission is ‘illegitimate’ according to the UNE 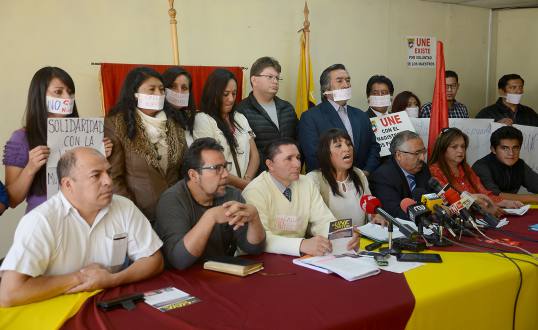 The National Union of Educators (UNE) insists on ignoring the Liquidation Commission that integrated the Ministry of Education to implement the determined dissolution on August 18.

Yesterday it was expected that members of this body arrive to the headquarters of the organization to request financial and legal documentation, as part of the liquidation that started the government for allegedly violating its rules. Until now, they have not arrived.

The leaders and members awaited with the front doors closed, and large posters in defense of the UNE.

Its president, Rosana Palacios, said that the commission is “illegitimate”.

“I do not know any illegal act done against the UNE, the commission is not legal, it does not fit to the statutes, we do not know it and we will be vigilant,” she said.

The chairman of that committee, Jenny Villacis, told Ecuavisa yesterday that they will request for the information of the process that is required, “so that everything is clear and we can work together”.