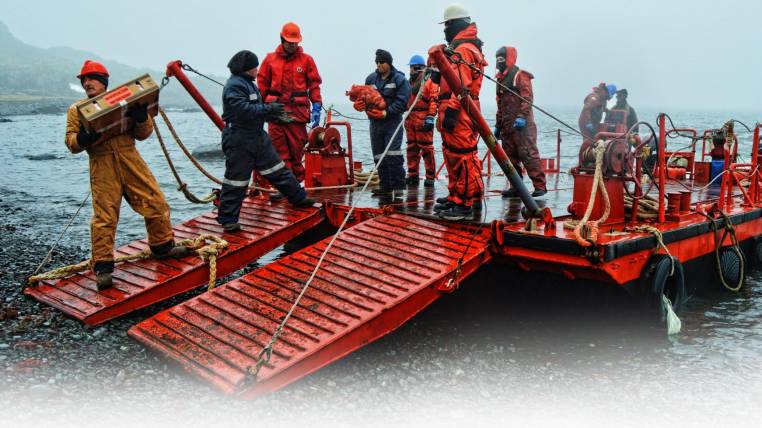 Life in the Ecuadorian scientific station, in the most inhospitable place on the planet, is more bearable with a plate of guatita

At 06:45 the first chords start playing ‘Master of puppets’, from Metallica. For the ‘toque de diana’, each one of the ranchers (expeditionaries who rotate daily to serve meals) chooses the music they like the most. From the window you can see a calm sea of leaden color speckled with clouds, on the beach of black earth there are some snowflakes. At 07:15 the members of the Antarctic expedition breakfast coffee or tea accompanied by arepas, empanadas and even hamburgers. Of course, the classic overheated is not missing.

Around 08:30 all are working, in the construction of the new module of  Command and Control or in the investigations. But be careful, before leaving to the outside world you have to prepare yourself. Even though we were in February, one of the hottest months in Antarctica, at the base there were temperatures up to -20 ° C and winds of 80 kilometers per hour . We have three overlapping layers – the last waterproof – polarized sunglasses, gloves, hat, boots and sunscreen.

The scientists, all sent and under Ecuadorian protection, go out to collect samples, always with a minimum of two people, for security reasons. The French doctor in   remote sensing of speed cameras Cristophe Fatras studies the decrease of glaciers on the island as a result of  climate change; the Spanish doctor in archeology Beatriz Fajardo works on the hypothesis of prehistoric human groups that inhabited the white continent; Dr. Miguel Gualoto investigates microorganisms that are capable of absorbing hydrocarbons. For its part, the Ecuadorian chemist Carlos Banchón analyze natural chemical processes to eliminate water pollution. They are only examples of the national contribution.

The Ecuadorian base Pedro Vicente Maldonado is located on Greenwich Island, in the archipelago of the Shetland from the South , very close to the Antarctic continent. It was inaugurated in 1988, since then XXII expeditions have been carried out, always with a scientific purpose. In this year, 31 expedition members participated, among scientists, military and public servants. It is only open in the months of the so-called Antarctic summer, from November to March. On this occasion we stayed 33 days, from January 31 to March 3. It consists of four rectangular metallic modules of orange color – to be visible from the sky – thermally isolated: the laboratory, the house of boats and other two that house the bathrooms, the kitchen and the living room. All rooms have heating.

Outside, a group of welders finalize the metallic structure of the fifth module of   Command and Control . They work like a swarm of bees: everyone knows their task perfectly. They are fast and efficient, they work against the clock, because due to the weather conditions there are days that you can not even leave the base, especially when it snows.

The atmosphere that is breathed is exceptional, the camaraderie and the good humor abound. The expedition, organized by the Armada of Ecuador, is aware of the unique experience they play. The presence of Commander Julio Ortiz Melo, leader of the contingent, has much to do. Of vitalistic and kind character, but firm when making decisions, directs and organizes each of the operations. Since   Guayaquil , the commander   Juan Carlos Proaño , director for three years of the Ecuadorian Antarctic Institute, is in charge of logistics and that everything is going well.

At 12:30 it is lunch. With their excellent seasoning Oscar and Adrian chefs are responsible for reducing the melancholy that could cause distance and isolation: pate broth, tilapia with seafood, shrimp ceviche, guatita, cheese buns , the list is endless … Until 2:00 pm there is rest. The workday extends until 7:00 pm, dinner time. Then comes the shower and a well-deserved leisure time, we usually watch a movie or play cards. No social networks or internet, we only have a community mail to send messages, a kind of social experiment with which all communicate. A few days later nobody remembers WhatsApp, while interpersonal relationships are lived with greater intensity.

The landscape surrounding the station is barren; the only vestiges of life are mosses, lichens and some other penguin misplaced. The ground is of black earth and boulders. Up to the back of the modules, the jaws of the glacier reach the base of the water. On the horizon, as watchful sentinels, you can see the silhouettes of the Barrientos and Dee Islands, inhabited by colonies of penguins and sea elephants.

In the Antarctica each action acquires an almost fantastic varnish. You go out for a walk to the inlet and you stumble upon a seal, solar eclipses are very frequent. We could contemplate one where, for a moment, the sun changed into a moon. Football matches are the most unique on the planet: surrounded by  glaciersmilenarios , listening to how the icebergs fall into the sea and with a sea lion as a fan.

But Antarctica is not a game. If you fall into the sea you have a life expectancy of about 8 or 10 minutes at most, there are several people who have disappeared forever walking among the glaciers, “never forget it, Antarctica does not forgive”, he repeated again and again Major Ortiz. In spite of this some expeditionaries (among which this journalist was) did not reject the possibility of carrying out the classic Antarctic baptism. It basically consists of completely submerging for a few seconds on the shore of the beach. Upon entering the body receives an electric lash that ascends to the bone marrow.

Also keep in mind that there are no airports or docks. Any activity is done in a rubber boat. All food and construction materials are sent by boat from the American continent in large metallic containers, disembarking is a small epic.In our case, we leave Antarctica by plane, from the only airstrip that exists, in the King George island. Only if the weather is mild does the plane land. Some of the Ecuadorian expeditionaries had to wait up to 12 days, this time we were lucky, it only took a day.

In one of the exits we visited Tip Ambato, a singular coastal massif that, through erosion, acquired the forms of an indigenous face. Commander Ortiz named it Vigía Huancavilca, in honor of former settlers from the lands of Guayaquil, to protect this small piece of Ecuador located at the end of the world .

Ecuador, with veto and vote in the Antarctic Treaty

In 1959 it was signed in Washington he Treaty Antarctic , which regulates international relations and the interests of the white continent. This document promotes   investigation   scientific , prohibits military practices and freezes any kind of   claim   territorial. Since 1987, Ecuador is one of the 53 countries that is part of the Treaty. In addition, it is one of the 29 that has the category of consultative member, that is to say that they have the right to vote and also veto, as happens to countries like   Russia, China, France or state States. The treaty has indefinite validity and can only be modified by the unanimity of the consultative members. Antarctica hosts the 70% of the planet’s fresh water, in addition to huge reserves of oil, metals and mineral resources.

The Russian base Vostok recorded the lowest temperature on the planet, -89 ° C.

In summer, there is sunlight 24 hours a day. In winter, permanent darkness.

It is the driest place in the world because of the scarce rain, but at the same time it contains around 70% of the planet’s fresh water. If it melted completely, the sea level would rise about 60 meters.

There are 70 scientific bases. (I)

Public mismanagement is squared with a word