Loja TV Channel is raided and broadcast equipment is confiscated 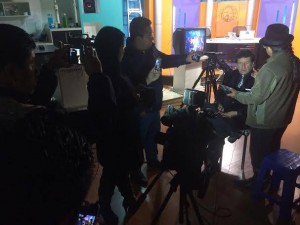 Police officers and officials of the Agency for Regulation and Control of Telecommunications (Arcotel) raided at dawn on Wednesday the Ecoteltv facilities, located in the center of the city of Loja, to take away broadcasting equipment and other assets.

Ramiro Cueva, director and general manager of the media, has explained they will resort to the constitutional right of resistance, as their “indigenous partners did in Quito, when they tried to raid their facilities.”

“We will not let them to shut us up by unreasonable complaints filed regarding alleged acts of corruption involving officials of the current government,” Cueva said.

Ecotel TV newscasts reported in recent days that school furniture would have been supposedly taken from the San Juan Bosco de Gualaquiza school, in order to carry it to Loja and inaugurate the Millennium School ‘Bernardo Valdivieso,’ where President Rafael Correa was present.
Source: http://www.eluniverso.com/noticias/2015/12/16/nota/5301501/allanan-ecoteltv-se-llevan-equipos-transmision