Lourdes Tibán: ‘Glas must come and face the music.’ 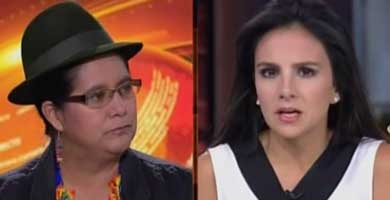 Assemblywoman Lourdes Tibán said she will sign the request for impeachment against Vice President Jorge Glas for the Odebrecht case, as well as her parliamentary bloc Pachakutik. She also made an invitation to the 100 legislators of Alianza Pais to join the impeachment trial and not to be accomplices of corruption.
“We all know that Glas is involved in all the contracts of the productive matrix … Jorge Glas should go to the National Assembly and say here I am.”
“Glas must come and face the music,” she said.

“I do not know if it’s a joke the fact that the corruption bill came out with the name of its holder.” We do not question the works but how much they robbed under the pretext of the macro works. Glas is responsible for the contracts of the productive matrix.”