Lower tax burden and trust would be the remedy 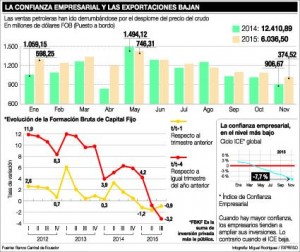 If anything forecasts that the storm has not yet gone, is that pinprick that has deflated domestic investment, although foreign investment was more generous than usual.
It’s about less money that would cease to be injected to the economic vein, which would mean a new downward trend for the Gross Domestic Product (GDP). This, at the macro level, but at the enterprise level would result in job cuts: another blow to the family budget.

Employers have been mistreated, so it becomes difficult to believe in new offers, even with the new law on Public Private Partnerships (PPP), which offers tax advantages. “Capital moves between two extremes: the ‘greed’ and fear.” When there is uncertainty, capitals flee, says Marco López, former member of the BCE board.

But they, the private sector, are the ones that could assume this part of the investment that has been stopped by the public, and has also contracted household consumption, the sector that drives the GDP. (I)

The Prosecution investigates how 366 university degrees were registered