Luis Noboa Running for President of the Barcelona Sporting Club 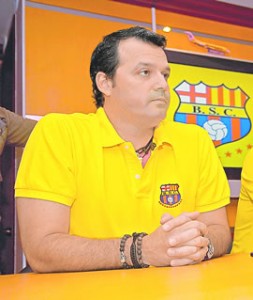 On a dialogue with “Sports in Ecuador and the World”, Luis Noboa admitted that he will be a candidate for the presidency of the Barcelona Sporting Club. He also added that he will not take any alliance like the one Eduardo Maruri did saying “this renovation has left us all bad”.

When asked if he would use his own money or look for self-financing through advertising contracts, Noboa stated that “at first we must invest to have a great time. This will involve a project in the minor divisions for a period of four years and it will permit that players are not hired rather they will come from the same place.” After that Noboa, said that all contracts are going to be analyzed and that “we should check to know if it’s true that the current policy has compromised not only next leadership but maybe two or three more.”

“As its being said, one is committing not only to the next leadership but also to 2 or 3 more. Things are getting bad, they go by stages, teams are signing contracts for two, three years, these institutions want to grow” Noboa detailed.

Noboa stated that it’s easier to hire when the team is down and that it’s important to know that the club has to be able to do things in a good way. He also added that for his presidency he would go with people of trust, like his brother Antonio, besides him. There would also be Antonio Barriga, and Doumet, among others. Pointing out that he wouldn’t look for new alliances, Noboa added “That union was the one that separated the unity of the barcelonistas”.

He admitted to have made mistakes but claims “he is only human”, and that he has “learnt from them and hopes to apply that”. Noboa plans to arrive with a solid project that will reactivate the training, “Barcelona must have a great team and we have to invest to get it and after the fourth year we will have our own boys”.

The minors didn’t get any shoes, no water, he brought them all those things and said that to create a great player there must be great elements on the first team.

In case that he is elected as president on 2011, Noboa said that the people that came with Maruri must go, just like the Spaniard Ángel Gómez who is the current Sports Manager. Regarding Coach Juan Manuel Llop, he said “he shouldn’t have been a part of the team on 2010 and definitely not in 2011.”

Noboa said he has many ideas to get the club started and hopes to have the opportunity to show how good things can be done on the institution. Regarding the possible candidature of Alfonso “El Pocho” Harb, Noboa said he would be good since he is a Barcelonista with good intentions; however he was on Maruri’s side and hasn’t opposed to what the board is doing.

On the other hand, he criticized that Maruri is saying that the institution owes him 2 million dollars, adding “there is an enterprise called RSI which was the one that lent him the money and signed a promissory note, he owes to them, why he’s got to say it’s me”.

628 People Suspended from their Jobs Due to Corruption in Petroecuador