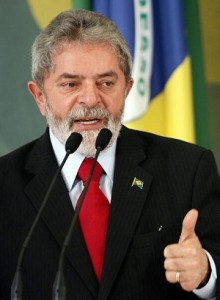 Lula Da Silva, he was born in a poor and illiterate family; who sold peanuts; sold fruit and polished shoes; who was a steelworker and graduated from lathe operator; became president of Brazil on October 27 of 2002, and today hang over his presidency to Dilma Rousseff.

His interest on politics began in 1966 at the trade union movement, which produced that in 1975, and 1978 be elected president of the metalworkers’ union, he led strikes that accelerate the end of the dictatorship, then in 1980 founded the Workers Party. In 1982 he lost the election for the government of Sao Paulo but at 1986 he integrated the Constituent Assembly.

In 1989, he became president candidate, and despite leading the polls, he lost the election with Fernando Collor de Melo. In 1994, he was again defeated, this time for the candidate of the Brazilian Social Democracy Party (PSDB), sociologist Fernando Henrique Cardoso, who again beat Lula in his third bid for the presidency in 1998.

Finally, on October 27 of 2002, Lula was elected president of Brazil, defeating to Delfín de Cardoso, José Serra, with the largest number of votes in the democratic history of Brazil (52.4 million) reaching a 61% of the votes.

His great career as president earned him the respect of heads of state as Barack Obama, who declared Lula “the world’s most popular leader.” Or of former British Prime Minister Tony Blair, who called him “one of the most outstanding leaders of modern times” as well as numerous awards from popular media as Time magazine.

Filantropic aid for Ecuador: End Of The Year Summary