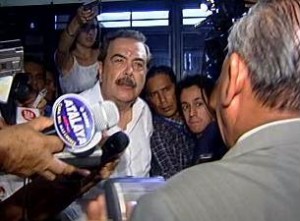 Wilson Luque, judge of the 11° the of Civil, hesitated to prosecute Jaime Nebot, after the verbal attacks discharged against him yesterday afternoon during the second failed hearing in the ECAPAG case.

Luque, showing his authority, asked Nebot to withdraw his office. He added that Nebot should have been arrested because of the occurred events. He also said: “(…) I can follow him a suit for the damages and prejudice because it is an injury that he is causing me, both physical and moral. (…) I’m thinking about it, meanwhile I will continue the process.”

He ensures that Nebot’s participation in ECAPAG case, is a political strategy because followers from the Social Cristiano and  Madera de Guerrero parties have decrease.

One of the Ecuador’s Most Wanted Criminals Was Arrested