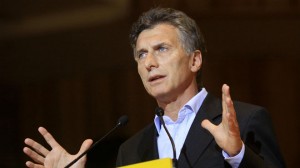 Mauricio Macri, who became last Sunday president of Argentina and broke 12 years of the continuous Kirchner regime, has not yet moved to the Casa Rosada, but he gives a lot to talk about in the presidential district of the region.

Upon entering the club of heads of state, the businessman and center- right candidate promises to isolate Venezuela by the “persecution” of opponents and the state of freedom of speech, invoking the Democratic Charter of Mercosur. This is a similar strategy that analysts and opponents in Ecuador outlined after signing the agreement with the European Union, which today remains in ellipses.

The Argentine shift has been received with bipolarity in Ecuador. The national political class, as usual, is divided between the euphoric embrace of welcome, in the words of the opposition leader of CREO, Guillermo Lasso, “this nourishes the hope of Latin America” and the distrustful gaze of Culture Minister Guillaume Long, who, before the applause of “Nebot, Rhodes and the Latin American, and global right,” considers appropriate to demand the “citizen watch” of governments.