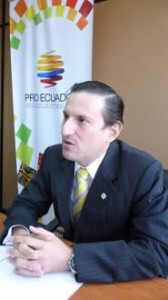 This Wednesday and Thursday will be held the Macro business conference Ecuador 2014, from 09:00 to 17:00. The event will have the participation of 157 entrepreneurs from Latin America, Europe , the United States. and non-traditional markets such as Singapore and United Arab Emirates.

In the event, which will take place in the Convention Center “Simón Bolivar” in Guayaquil, there will also be 572 local exporters. They will offer their products and keep business meetings with potential buyers.

Victor Jurado, General Coordinator of Pro Ecuador, the organizer of this convention, said that until last Friday 3,952 appointmens between enterpreneurs have been confirmed.

“It’s not a fair, the enterpreneur only meets others of their own interest,” emphasized Jurado , who expects to close negotiations for $ 200 millions and exceed the results of the first two editions of this event in 2012, where negotiations reached $123 millions and $170 millions in 2013.

Among the products that top the Ecuadorian offer, are  : bananas, chocolate, flowers and shrimps; and other non-traditional such as technology and building materials.