During the anniversary ceremony of the deceased Bolivarian leader Hugo Chavez Frias at the Headquarters of the Mountain, where his remains are buried, the president of Venezuela, Nicolas Maduro said that “a right-wing president, who is not worthy of his people, is creating conditions for the OAS and other international organizations to intervene. This is about the president of Panama. I’ve decided, facing the open conspiracy of the Chancellor, to sever diplomatic and trade relations with Panama.”

The response from the president of Panama, Ricardo Martinelli was immediate. “I’m surprised over the Venezuelan government’s decision. Panama longs only that our brother country finds peace and also strengthen its democracy,” he wrote on his Twitter account.

The dispute between the two countries is not new: since opposition protests began, certain leaders of the continent became target of their anger, including Martinelli, who was one of the most criticized over condemning the repression of the Chavez government. 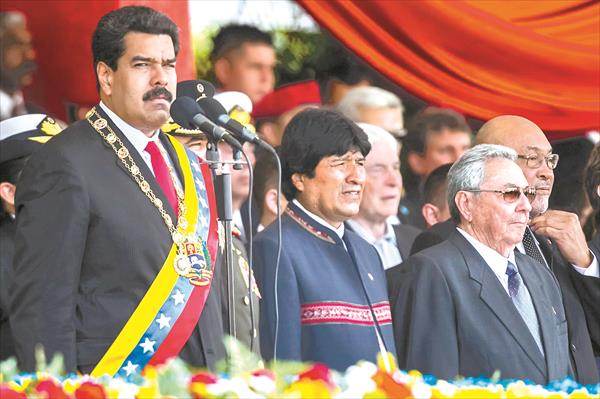 Nicolas Maduro next to other presidents during the anniversary ceremony of Hugo Chavez’s death.