Maduro keeps a “strong hand” against protests in Venezuela

After threats of Venezuelan President Nicolas Maduro to “free” the middle class districts of improvised barricades, considerably less Venezuelans came out to protest against the government.

National Guard troops were positioned at the corners of the neighborhoods of Altamira and Chacao in the morning on this Tuesday after dispersing hundreds of protesters with tear gas and water cannons last Monday night.

David Smilde, principal investigator of the Washington Office on Latin America (WOLA), an organization of human rights, said that “a tougher police response and fatigue of daily marches have drawn some of the momentum of the protest movement,” “as the inherent flaws of economic policies and the political model make Chavez’s revolution increasingly fragile, the government seems more willing to trust on the brute force,” he added.

Opposition parties and students have vowed to continue protesting around the country until Maduro releases all the political prisoners, improves product delivery and put an end to police repression. The president has called the protesters as “fascists,” accusing them of attempting a “coup d’etat in slow motion” against him with the help of the United States. 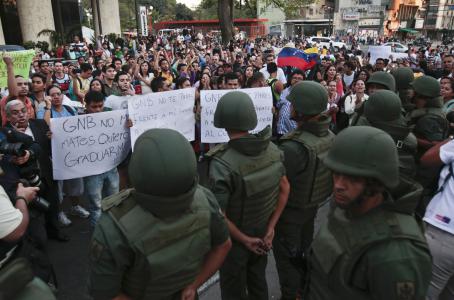 Protests in Venezuela are being stopped with heavy military force.