The walls are covered in graffiti . With black, yellow and red sprays the initials LK were marked. The bleachers of the fields and light poles of the parks look the same. The residents of Durán , a canton near Guayaquil , say that it is the signature of the Latin King, an organization dedicated to hit men and other crimes . 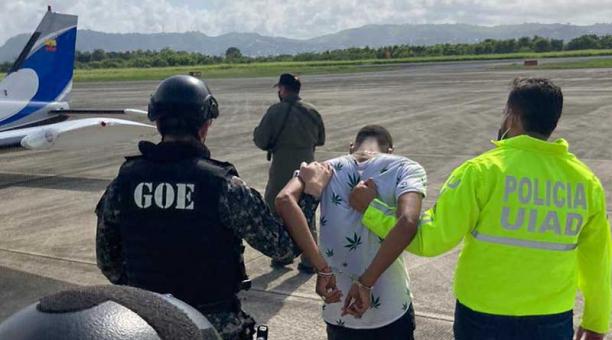 The Police have in their reports what is happening and assure that the so-called Chonero Killers , another organized gang, is also involved in violent deaths .

Official reports show that two years ago the illegal groups began to recruit more hitmen, as a dispute over territories to sell drugs was beginning .

This phenomenon became evident last year, especially in areas of the Guayas .

Now, based on the investigations carried out, the agents say that since the beginning of the ” war ” between them, the mafias recruited especially minors and young people , due to the need to strengthen their armed groups .

In 2020, the police captured 10 boys who were involved in murders that took place in Guayaquil and other surrounding sectors. Today, in the possession of the uniformed men are another 20 capture tickets for suspects , whose ages do not exceed 24 years.

Based on these cases, the researchers know that the members of the gangs travel through popular neighborhoods of the cities to capture even adolescents. They indicate that with money and drugs they convince them to join their ranks.

In the files it is said that they initially used them for the sale of small doses of drugs . Over time, they are trained to hold guns, load ammunition, and shoot victims. Driving cars and motorcycles is also necessary.

After the crime of the television presenter Efraín Ruales , the authorities of the Ministry of the Interior and the Police indicated that the people who attacked him had training , since they fired while they were on the move. The autopsy showed that he died of internal bleeding that was caused by a single gunshot.

Investigators say they were recruited by gangs when they were minors. In the case of alias ‘Alvarito’ , the Police indicate that he was trained as a teenager in the south of Guayaquil .

In the judicial offices there is a list of those apprehended.

In the middle of last year, alias ‘Patas Cortas’, who was involved in at least five murders, was arrested .

The judicialized documents indicate that his activity began when he was a minor, but he was captured only when he reached the age of majority. It is investigated.

In those same days, a 17-year-old minor was also apprehended in Durán carrying firearms. He was accused of a crime, but the judge released him and granted him socio-educational measures.

The reports raised after the capture of the suspects indicate that the recruitment of the boys to commit crimes also takes place in four other provinces of the coast: Manabí , Los Ríos , El Oro and Esmeraldas .

In the latter, it has been discovered that young people are recruited in border areas .

Due to its proximity to Colombia , the authorities say that part of the training is received in that country with illegal groups . Then they dedicate themselves to the hired assassin . In social networks, the suspects show part of the weapons they have and the money they charge for the deaths. In the publications they say that they are prepared for everything.

In early 2020, two teenagers entered a hospital and murdered a man while recovering from an accident. They attacked him with a pistol that had a silencer .

In Los Ríos there are also murders committed by minors. There, the gendarmes say that networks are taught to plan the attacks .

In crimes that have occurred in the last year, gangs have been found to operate with motorcycles and vehicles . That allows them to easily escape after the fact.

This is how the murder of politician Patricio Mendoza was committed last December. The Police have data that those responsible mobilized in two vehicles and a motorcycle. The case remains under investigation and there are no detainees.

In that group are four suspects who were arrested last November.

According to the Prosecutor’s Office , they participated in the death of a mining businessman and two of his children, the same month. The agents identified that the unknown men have ties to criminal gangs that train hitmen.

The crime of murder for hire was officially typified in the Penal Code Integral since 10 August 2014. From that date until December 2020, justice has determined that 124 murders were officially executed under that type of crime.