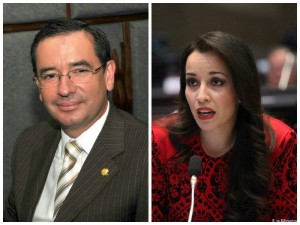 Juan Carlos Cassinelli and Verónica Arias preside from Tuesday, November 11, the Occasional Commission in charge of analyzing the draft amendments to the Constitution. They were both appointed at the first meeting.

Cassinelli is an Assemblyman of the Alianza PAIS political movement and Arias belongs to the ARE movement.

For the appointment of the directors, the Commission was installed without the presence of Patricio Donoso of CREO and Luis Fernando Torres of PSC.

Cassinelli’s aspiration is to deliver on November the report for the first debate in the plenary of the National Assembly, although the Legislative Council of Administration (CAL for its Spanish acronym), by resolution, set a deadline of 30 days that would be fulfilled in the first half of December.