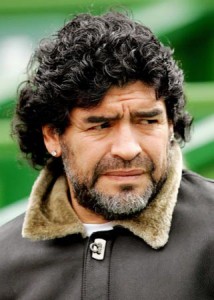 Sport idol Diego Maradona admitted Friday night the he will not be able to couch the Argentinean team, after being fired last July due to its failure in the South Africa World Cup of 2010. “I have no chance of going back, they would have to change many issues for me to come back, and it could take a while. Now I have the doors to the team closed.” was Maradona statement to the channel Telefe.

Diego will be 50 years old on October 30; he was running last September to redirect the team. “I would give my life to continue to be the teams couch.”

Sergio “Checho” Batista is the current couch, so he is the one with most chances of replacing Maradona.

Once the best soccer player of the 80’s, Maradona said, after being fired, he didn’t regret stating that the leader of the Argentinean Association of Soccer, Julio Grondona, lied to him and that manager Carlos Bilardo was “a traitor.”

Spanish Cyclist Waiting to be Back on Track