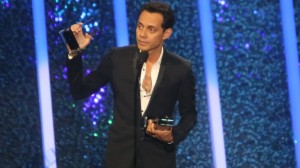 `It’s been two amazing years, my team … my children, but I also want to dedicate this to a teacher who taught me how to live, the Great, Cheo Feliciano,´ were the words of Marc Anthony when receiving on Thursday night, at the Billboard Latin Music Awards 2014, 10 of the 15 awards for which he was nominated.

Artist of the Year, Latin Album of the Year, Tropical Album of the Year and Song of the Year for his album 3.0, were some of the honors received by the Puerto Rican salsa singer. The ceremony, held at the Bank United Center at the University of Miami, Florida, was attended by artists like Juanes, Enrique Iglesias, Wisin y Prince Royce, who delighted the audience with a joint presentation.