March in Mendoza, in memory of their two Argentine citizens, murdered in Ecuador 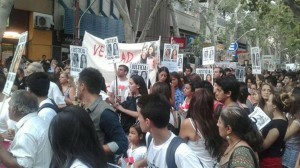 Around 10 thousand men and women marched yesterday in the streets of Mendoza, Argentina, demanding justice for the crime of their two dead citizens: Marina Menegazzo and María José Coni, murdered last week in the Ecuadorian town of Montañita.

According to the Argentinian newspaper, La Nación, the protesters held lighted candles and banners with messages such as “tears of silence”.

The march was named “Everyone with Marina and María José”. Another message was also strong among the crowd: “No more losses”. The police estimated that over ten thousand persons walked for the cause, angered and saddened by the tragic murder of the two young Argentines. (I)