Marchs in Italy against the economic policies of Renzi

Thousands of people joined the general strike called by the two largest unions in Italy against labor and economic reforms of Prime Minister Matteo Renzi.

The government “is wrong to exclude the unions and do not let us be involved in economic policy,” complained Susanna Camusso, Secretary General of Italy’s largest union, CGIL, also leftist. 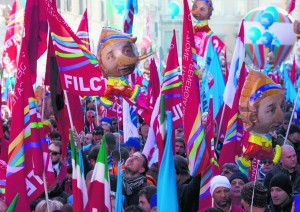