Margoth Escobar appears today before the judge, after ‘illegal’ departure from the country to attend the IACHR 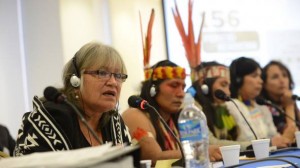 Activist Margoth Escobar will appear today before the court with the certainty that she left the country ‘illegally’ in order to attend the Inter-American Commission on Human Rights (IACHR) in Washington, United States.

She acknowledged this yesterday in a press conference she gave at her home in Puyo, Pastaza, and in which she explained why she evaded the prohibition to leave the country imposed on her two months ago.

She is under investigation by the provincial Prosecution for the alleged crime of “attack and resistance” she had allegedly committed during a march against the regime, on August 13th.

Escobar reported said received an invitation from the Commission to expose her arguments at a hearing, and her lawyer asked the judge three times to authorize her trip, but he received no reply.

She recalled how she was ‘hit’ and ‘abused’ when she was apprehended. “Then I said to myself, Why shouldn´t I leave the country illegaly, why not?”

She stated she could not miss the ‘opportunity’ to testify about what is happening in Ecuador with human rights.
She admitted she had no problem to leave the country, nor to enter; and again she recognized that she ‘evaded’ the law.