María Alejandra Vicuña is sentenced to one year in jail

Ecuadorian ex-president María Alejandra Vicuña was found guilty of concussion in the Tithes Case. For the offense he must serve one year in prison. 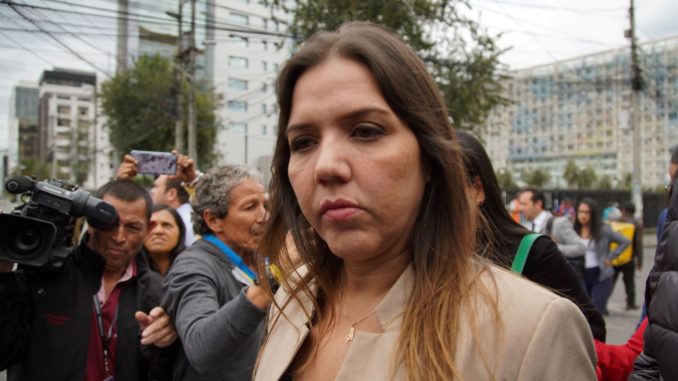 María Alejandra Vicuña is sentenced to one year in jail

The Criminal Court of the National Court decided that Vicuña will also have to pay a fine of US $ 173,180 dollars and the confiscation of a property. This was made up of judges Marco Rodríguez, Daniella Camacho and Wilmer Terán.

Vicuña, who was an assemblyman for the PAIS Alliance party, was accused of demanding money from two of his collaborators, Ángel Sagbay and Carla Obando. They claim to have made deposits in the personal account of the former vice president.

In the case, the Prosecutor’s Office argued that Vicuña received bank transfers from three of its advisors for values ​​of $ 23,300, $ 14,650 and $ 5,345, respectively, and accused her of being the author of the crime of concussion.

The collaborators testified that the payments were aimed at financing the left-wing movement Bolivarian Alliance Alfarista (ABA), of which Vicuña was a leader.

Two of them said that the money was part of a condition to keep them in the positions they occupied when she served as a legislator, an extreme denied by the former vice president.

Vicuña argued that the deposits corresponded to voluntary contributions, and denied any illegality.

The ex-applicant was succeeded in office in December 2018 by Otto Sonnenholzner, after receiving parliamentary support.

The current vice president is the third of the Government of Lenín Moreno, and became the first in the position that was not linked to former president Rafael Correa, who ruled Ecuador between 2007 and 2017.

Vicuña was preceded by Vice President Jorge Glas, elected with Moreno in the 2017 elections but who in December of that year was tried and convicted of a crime of unlawful association in the bribe plot of the Brazilian firm Odebrecht.

Banana farmers are looking to sell more to Asia