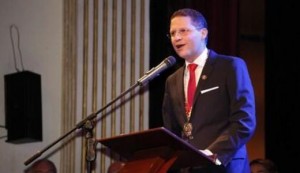 Mauricio Rodas, elected Mayor of Quito, received the investiture by the President of the National Electoral Council (CNE), Domingo Paredes. The ceremony was held yesterday at the Sucre Theater.

In his speech, the Mayor announced that tomorrow, at the first session of the Council he will present a project for fines reduction that apply to the `rush traffic hours and licence plate´ (Pico y Placa) system.

This provides that instead of waiting 24 hours, the driver will be informed and with the immediate payment he/she will get back the car.

He also proposes to avoid the padlock used to secure the vehicle in the so-called blue zone. Instead of this, a ticket would be extended to be paid within 30 days.

In both cases, the proposal provides that the fines are reduced to a 50% of the current value. Rodas also offered incentives to attract new enterprises; Access to new technologies in squares and parks with free internet.