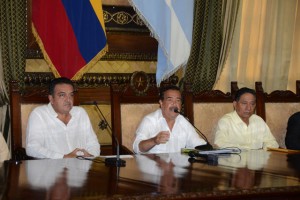 Jaime Nebot, Pedro Salazar and Jose Yúnez, Mayors of Guayaquil, Daule and Samborondón, yesterday signed a statement asking the government to build “the bridges it promised”.

Municipalities ask for the construction of two bridges over the Daule River (Located in Daule, near La Joya housing complex and in Samborondón, at the level of Liceo Panamericano school), for which studies have been performed to determine if this would be the ideal location .

The Ministry of Public Works said that if the bridges were constructed in that area, zonal governments would be forced to expropriate and affect the lives of citizens. The Ministry does not consider that the two bridges are the solution, but one located in Samanes neighborhood to ease the traffic congestion. Mayors respond to that saying that no college or property would be affected with this project.