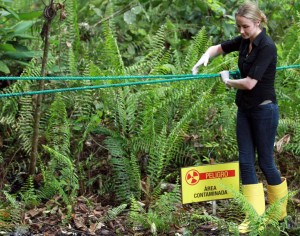 The MCSquared PR Inc company declared to the Department of Justice of the United States, that as part of its contract with the Ecuadorian government, it incurred in expenditures for “unaccounted” activities by $ 3.6 million.

In May 2013 -through the then ambassador in Washington Nathalie Cely- they signed a contract for $ 6.4 million to make an international campaign of public relations and communication to position the image of the government and counter that of the Chevron oil company. The contract ended in April 2014. Then, the prosecution and the Comptroller initiated investigations which concluded in no irregularities.

However, MCSquared presented last February 23 to US authorities a rectification or amendment that clarifies: “In addition to disbursements for recordable activities (…), disbursements were made for a total of $ 3’604.859,08 for not recordable activities related to the implementation of a Global public relations strategy (…) in jurisdictions outside the United States.”

In September 2014, according to documents of the Justice Department, MCSquared justified the expenditure of $ 1.9 million, including works for the Chevron’s Dirty Hand campaign and a visit of President Rafael Correa to the United States. In that report $ 4.5 million remain unaccounted.