Mexico asks penalty to Miley Cyrus for disrespecting its flag 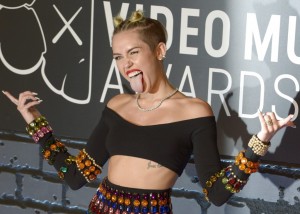 On Tuesday night , September 16, a date that coincided with the independence of the Aztec country, while American singer Miley Cyrus was performing a concert in Monterrey to 14,000 attendees, one of her dancers hit her butt the with national flag, after which the singer cleaned herself with the same, so the state legislature of Nuevo Leon in Mexico approved to ask the Ministry of the Interior of the Federal Government a sanction against Cyrus for disrespecting the Mexican national symbol.

Part of the text approved by the legislators says: “yesterday the first of two concerts of Miley Cyrus in Monterrey (Nuevo Leon capital) was performed, where a fact which represented a disrespect to our national symbols took place during her show, when one of the dancers hit the butt of the singer with a flag of Mexico.”

This penalty would be based on Article 32 of the Federal Law on the Coat of Arms, Flag and National Anthem, which states that any disrespect to patriotic symbols is punishable by a penalty or imprisonment. A commission will monitor the second concert of the singer, scheduled for tonight.