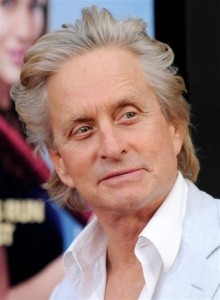 Oscar Winner Michael Douglas appeared on Today’s Show this Tuesday, This was his first TV appearance since he is cancer-free.

“I feel good, relieved. The tumor is gone. But, you know, I have to check out on a monthly basis now to maintain. I guess there’s not a total euphoria. I’ll probably take a couple of months of getting checked out. But it’s been a wild six-month ride,” Douglas told anchor Matt Lauer.

The actor, 66, completed his chemotherapy treatment in October; he was diagnosed with Stage IV throat cancer after Doctors found a tumor in the base of his tongue on August.

“All of a sudden the affection from my family, from my friends, and from my fans hit me at a much deeper level than I would have ever imagined before. And it gave me a really new appreciation of just how valuable, how precious good friends and family are. And it’s not that I disregard them before, but there’s a much deeper feeling. And I’ve talked to other cancer survivors about this, – that you just really, really appreciate what’s important in life,” said Douglas.

The actor, who is married to actress Catherine Zeta-Jones, is preparing to play a role in Steven Soderbergh’s Liberace; he is trying to regain the weight he lost (32 pounds) during his cancer treatment.

According to experts, three years have to go by to be absolutely certain that the cancer is truly gone.

Douglas and his family are looking forward to make a trip around the world.