The irregular migration of Ecuadorians, who venture through the dangerous Colombian-Panamanian jungle, skyrocketed between January 2021 and October 2022. 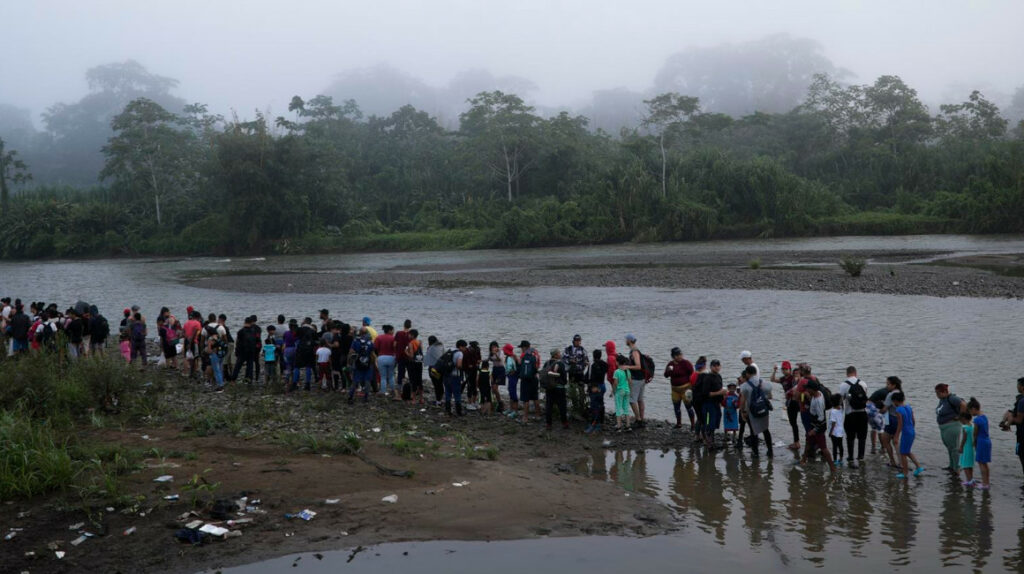 Thousands of migrants line up on October 14, 2022, in the town of Bajo Chiquito to be sent to a migration reception station in Panama, after crossing the Darien jungle.

The migratory wave from Ecuador, Venezuela, Haiti, Cuba and other countries as a result of the Covid-19 pandemic has reconfigured the illegal trafficking of migrants.

Since September 2021, countries such as Mexico and Guatemala began to request visas from Ecuadorians to enter and transit through their territories. Both countries were used as irregular transit routes to the United States.

This led networks of human smugglers or ‘coyoteros’ to seek new routes. For example, through Colombia and Panama, where you have to cross the dangerous Darien jungle on foot .

The Darién is a feared zone, of closed, difficult and hostile jungle and with the presence of criminal groups.

Figures from the National Immigration Service of Panama reflect this phenomenon. According to their statistics, in 2021 some 331 irregular Ecuadorians crossed through that area. While between January and November 2022 that number rises to 21,535 people.

In January 2021, the Panamanian government tracked three Ecuadorians crossing through that jungle area towards the United States. In October 2022, the record rose to 8,487 Ecuadorians.

The tragedy of a family

By the end of November 2022, five members of the Pincay Toaza family from Guayaquil undertook a trip to the United States.

The route chosen by the ‘coyotes’ hired by this family was the Darién jungle.

According to the story collected by the NGO 1800-Migrante, the Ecuadorians managed to cross the northern border of Colombia. But upon entering the jungle area things changed.

A miscalculation caused the family to run out of food. Two members of the group of migrants recounted that they went three days without eating anything. But they managed to reach the last section, before the Panamanian border point known as Candil.

There they had to cross a river and they hired locals to help them. They had to do it aboard a small boat and the rule was that the women and children crossed first. In the Ecuadorian family there were three women who embarked on that first trip.

In the middle of the river, the boatman made a bad maneuver against the current and the boat capsized. All crew members disappeared. Although most of the migrants were rescued, three women drowned and two are still missing.

One of the fatalities is Sonia Pincay Toaza. Her body was recovered and taken to a morgue in Panama.

Sonia was 52 years old and the mother of five children. According to the organization’s report, after a family collection to pay for the repatriation, on December 22, 2022, her body was in transit to Ecuador.

But the drama of the Guayaquil family does not end there. They are still looking for two of his relatives, both women.

Teresa Pincay Toaza and Yamileth Rodríguez Pincay, 62 and 20 years old respectively, are the two Ecuadorians who are still missing.

Panama is one of the 156 countries in the world that does not request a visa from Ecuadorians. For this reason, migrants can enter that country through any of its borders and continue on their way to the United States.

Only if a person needs to stay in Panama for more than 90 days, they must apply for a special permit before the Panamanian immigration services.

However, migration data from Ecuador shows that Ecuadorians who are using the Darién jungle as a transit route do not arrive in Panama through legal borders: they cross through irregular passes and do not register their departure.

Ecuadorian migration data also shows that the Nicaraguan route is still being used. It was even increased in September and October 2022.

In these two months, 9,536 Ecuadorians traveled to that country and only 105 returned. There is a difference of 9,431 migrants who stayed in Nicaragua or continued in transit to North America.

Delivery in exchange for regularization

The thousands of migrants from Ecuador, Colombia, Cuba, Venezuela, Haiti, Nicaragua and other countries seeking to reach the United States formed what were called caravans.

These are large groups of walkers trying to avoid Mexican controls, the last obstacle before reaching the border with the United States.

But the increase in controls by the Mexican immigration authorities has forced the caravans to change their methodology.

On December 20, 2022, the EFE agency reported that hundreds of migrants decided to voluntarily surrender to an operation by the National Institute of Migration (INM) and the National Guard, on the southern border of Mexico.

This filter was made by the Mexican authorities in the Miguel Hidalgo central park, in the city of Tapachula, to prevent more migrants from leaving in a caravan bound for the United States.

The authorities offered to take them to the Siglo XXI Immigration Station, where they were granted a 30-day permit to be in Mexican territory.

Unlike other occasions, in which the agents arrived and persecuted them, the migrants themselves massively climbed into the units, with the desire to be able to be legally in Mexico while they advance towards the United States.

This permit or official letter of departure allows them to go to the provisional care center and remain legally for 30 days in the state of Chiapas, in southern Mexico.

Cybercrimes rise 35% between November and December

Noboa Trading, the one with the highest increase in banana sales this year