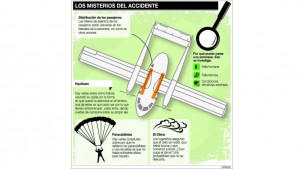 The state of the Arava 206 Army plane and the bodies of his 22 crew members, in the plane crash that occurred in the Selva Alegre community (Pastaza), leads to the presumption that it occurred at low altitude, it was slow and perhaps a free fall.

Rodrigo Rojas (Air Force) and Javier Villalba (Army), former pilots of the Armed Forces, agree that if the fall had been at high speed and fast, the impact with the mountain would have destroyed the fuselage and the bodies would have been shattered and scattered through the wild Amazonian vegetation.

But it was not like that. Ruben Nanchi (25), one of the inhabitants of the Selva Alegre community, who together with the military arrived at the scene of the accident long before the rescue teams, says he had never seen so many dead together. He even counted them, including the pilots who were in the cabin stuck in the mud of the creek.

The testimonies of the villagers, in addition to the videos exposed by television channels which show the crashed aircraft, make captain Rojas, a hero of the Cenepa War, presume that the speed of the unit was low. Even accurate, that is the characteristic of Arava, Israeli-made, which was built to take off and land on short runways at low speed.

But who knows in detail the Arava planes is captain Javier Villalba, chief pilot of the LAN Chile company, and who flew these airplanes when he was in the Army Aviation several years ago.
He, like other experienced pilots who have operated in the eastern Ecuadorian sky, knows the risks of flying over an area full of mountains, fog and thick clouds that at any moment can descend, annul visibility and put pilots in trouble, even if they are experienced.(I)
Source: http://expreso.ec/actualidad/el-avion-militar-sufrio-una-caida-lenta-DN168674