Military clashed with irregular groups from Colombia, in Esmeraldas

Armed Forces ( Armed Forces ) personnel had a confrontation with dissident groups of the Revolutionary Armed Forces of Colombia ( FARC ), in Mataje-Esmeraldas. This event occurred this Thursday, August 18, 2022. 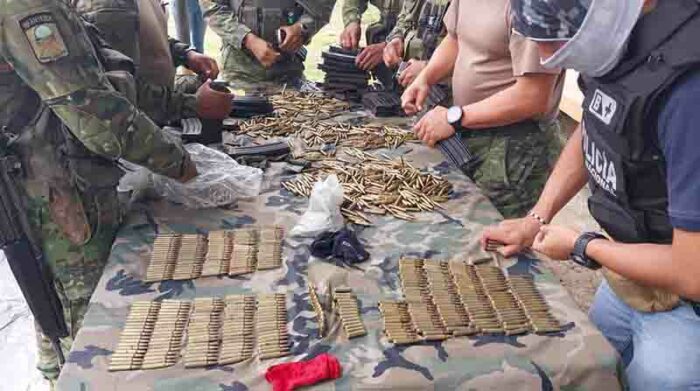 This August 18, 2022, soldiers seized ammunition and feeders, which belonged to irregular groups in Colombia.

The military entity indicated that the soldiers found seven armed people on the northern border . When they became aware of the military presence, the armed men began to shoot at the Ecuadorian soldiers. Then, they crossed into Colombia and fled.

According to the Ecuadorian Army, members of irregular groups in Colombia abandoned their weapons and ammunition.

This happened when the military carried out “reconnaissance and surveillance operations in the Mataje sector, in the vicinity of the international bridge.”

The soldiers seized 349 5.56 caliber ammunition, 11 loaded magazines, a combat vest and communication radios. The Prosecutor ‘s Office ordered, this August 18, 2022, the destruction of these weapons and ammunition seized.

On August 16, personnel from the Armed Forces. it also carried out surveillance operations in the San Lorenzo sector , in Esmeraldas. On the international political boundary, the military found seven suspected members of irregular groups from Colombia. At that moment a confrontation with firearms took place.

Finally, the soldiers managed to arrest two suspects (a man and a woman). The rest fled to Colombian territory. They went into the river and hid in the thick vegetation.

In addition, the soldiers seized a rifle, a magazine with 20 ammunition, a communication radio and two cell phones .

Government invests USD 450,000 for sustainable and deforestation-free production in the Amazon

Change in the Navy after drug trafficking scandal