COPIAPO,Chile. The 33 released miners woke up together this morning in the hospital; they are waiting for President Sebastian Piñera’s visit. The celebration of this amazing survival story is still going on. 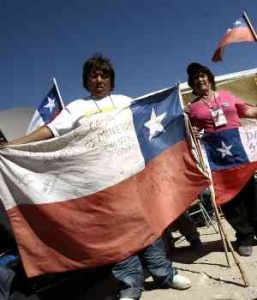 The workers were recovering in Copiapo city, near the mine that trapped them for 70 days 700 meters underground. Meanwhile, Chileans expressed their happiness, some of them even wanted to keep pieces of rocks.

The rescue took 24 straight hours, 33 miners were rescued in an operation that cost 20 million dollars. The liberation was officially over when Luis Urzúa – he was the chief of the 33 miners group – finally emerged, he actually set a new record; he became the man who’s survived the most time underground due to a mining accident.

“I cannot thank God enough, I came here from Santiago to celebrate, the party still goes on,” said Juan Carlos Gómez, a Chilean citizen who watched the rescue with thousands of other people on the Copiapo Plaza de Armas’ big screen.

Early in the morning, children raised flags; men and women had happiness tears running through their cheeks, they followed the rescue operation details minute to minute.

President Piñera will visit the miners in the hospital this morning.

The last rescued miners arrived the hospital late at night in helicopters and ambulances, while the whole world had their eyes on their tv screens.

The workers must stay in the medical center in order to be tested and treated –some need dental surgery –. Authorities affirmed that healthy miners could go home earlier.

According to a medical report, two miners have health issues; one of them is the oldest one, he has silicosis and acute pneumonia.