Mining and bad urban planning are the two risks of Zaruma 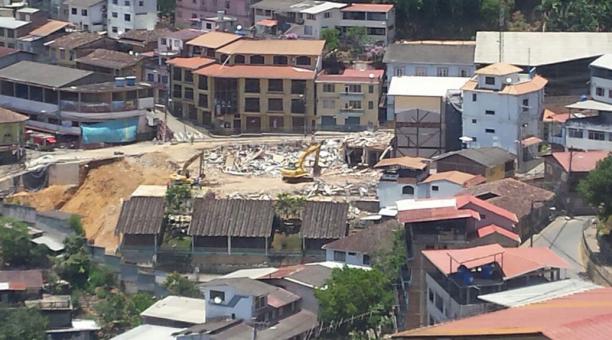 The satellite images analyzed by technicians of the Secretariat of Risk Management reveal sinkings in the cantons Piñas, Portovelo and Zaruma, in the upper area of El Oro. The analysis is part of the intervention in the area, under the responsibility of the Government.

Particularly, in Zaruma, the state of emergency was decreed due to the enormous sinkhole that caused the total demolition of an old school in the central helmet. On Tuesday, December 5, 2017, the members of the Remediation Committee of the Zaruma-Portovelo mining district received the first results of the geospatial study to prevent and reduce natural risks. These will serve as the basis for establishing solutions to the problems generated by illegal mining.

However, mining activity would not be the only problem of the canton, as undersecretary of Risk Management, Leonardo Espinoza said. “The specific studies developed in Zaruma have shown that the risk to which the city is subjected is not only linked to underground mining, but also to poor urban planning,” he said.

Espinoza explained that they compared several satellite images, captured at different times by the Military Geographical Institute. Thus they detected alterations in the three cantons of Ourense, but clarified that it cannot be said that all subsidence is caused by mining. “You have to analyze what the cause is”.

At the beginning of this year, a sinkhole caused the destruction of the La Inmaculada school in Zaruma. According to studies it was confirmed that the damage was caused by illegal mining works. In mid-September, President Lenin Moreno decreed the state of emergency and shortly thereafter issued a new decree for the remediation, recovery and productive development of this canton and its neighbor, Portovelo.

As part of the controls, 47 mining areas of Portovelo and Zaruma were temporarily closed for inspections. The objective was to verify whether or not they had a connection with the Zarumeño urban area. The measure caused continuous protests. More than two months later, the Mining Regulation and Control Agency (Arcom) reported that 21 areas have a legal resolution that allows the lifting of the ban on their mining activities.

“There is no possibility of the Mining Ministry granting new mining concessions in the Zaruma exclusion zone,” Mining Deputy Minister Rebeca Illescas said during a meeting with miners in Portovelo.

The civil employee assured that by the extension of the galleries or underground tunnels it is difficult to execute internal controls. He recalled that since 1992 a mining exclusion area has been created, covering the urban area of Zaruma. Currently, there are 173 hectares where exploitation is prohibited.

The Secretariat of Risk Management announced that it will continue monitoring in the area. Undersecretary Espinoza explained that mining should be surveyed in the areas of greatest threat. That investigation, he said, will require the contribution of mining experts, geologists and structuralists, to inspect the tunnels and analyze possible remediation. “The interior of Zaruma is like the New York subway. Galleries appear on one side and another, at different heights, “he said.

As part of the solutions, the mayor of the canton, Jhansy López, asked the Remediation Committee for the construction of the La Inmaculada school in another area. He said that this will fulfill the dream of the 400 students who lost their school. He also asked for the construction of a new hospital, since Humberto Molina was closed after the earthquake on November 17. The fissures of the structure, generated by illegal mining, increased after the earthquake that had its epicenter in Balao (between Guayas and El Oro).

“Zaruma, Portovelo and Atahualpa depend on the health district that is in this cantonal capital. The hospital had a bed capacity of 77% and was almost the only one to give attention in specialties, such as Traumatology, in this area, “said the mayor. (I)