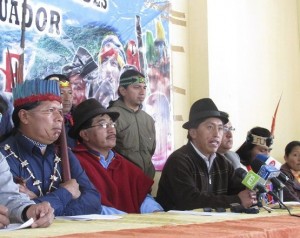 The Defence Minister, Maria Fernanda Espinosa, said yesterday that the government is waiting for the possession of the new Sarayaku leaders, to resolve the conflict which corresponds to the refuge granted by this Community to Cléver Jiménez, Fernando Villavicencio and Carlos Figueroa, sentenced for defaming President Rafael Correa.

For Espinosa, the current directive is highly politicized and mentioned that `no one consulted to the people if they wanted to receive the fugitives, this is an irresponsible decision by the current leadership.´

For her part, the Minister of Justice, Ledy Zuniga, mentioned that the leadership change could originate as a result of discomfort in the community about the situation. ´Surely the people did not know the transcendence of a politicized decision,´ she said.

The new authorities will assume command of the community next Saturday 18 May.

Prison against two ex-seers of the “Big Brother” Case