During an event in Guayaquil as a part of a campaign against gender violence, Interior Minister, Jose Serrano, criticized the Sarayaku community for defending Clever Jimenez, Fernando Villavicencio and Carlos Figueroa, emphasizing on images that showed armed persons escorting Jimenez.

Serrano also gave details on what the next step on the matter would be, “Armed gentlemen, behind a fugitive from justice. And now it turns out that these weapons are just for hunting. I remember a gun, of equal features, that did not only kill birds, such weapon was also used in the year 2009 to kill an Indigenous citizen in Macas, a pellet gun, so do not come to us with that ‘story’ they those are just hunting weapons.” 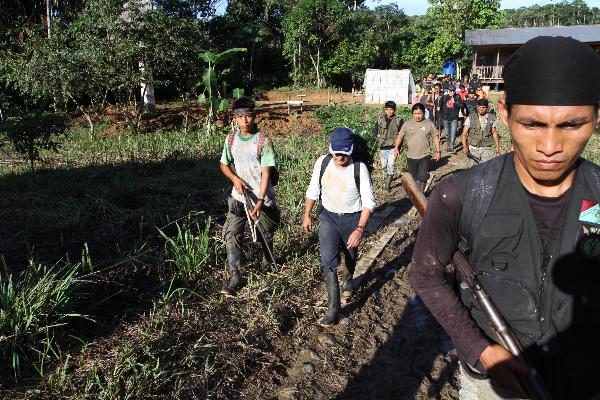 The Minister of Justice, Ledy Zuniga, who also attended the event, explained other actions which seek to give their version of events to the international community. ”We are already making an appointment to the President of the Inter-American Court of Human Rights, to assist with the governor of the nation and inform the actions happening in Sarayaku. We will inform them of the facts being raised, and the so-called fulfillment of a sentence that is being used by these three fugitives, which in turn is threatening the peaceful coexistence of the Sarayaku people and the state in general,” said the official.

Housing and Finance Ministers will explain the implementation of the budget